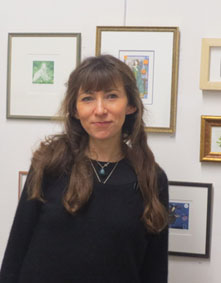 I was born in 1974 in Wimbledon, and I grew up in Kingston-Upon-Thames in South-West London. I graduated from Kingston University in 1997, with a BA Hons in Illustration. Since then I have worked freelance as an illustrator and printmaker. I often work in etching and aquatint (inked-up on the plate in one sitting and printed in one impression), but I also sometimes work in watercolour, which is my current medium. My personal work is mostly inspired by fairytales and stories, animals and mythological creatures,and places I have visited. I am currently working from a studio in South Wimbledon, run by ACAVA, having previously worked in a studio an old wharf by the Thames in Hammersmith. There is an Open Studios event every September at my current studio.

I have also contributed to;
'The Complete Tales of Hans Christian Andersen'- The Folio Society 2005
(1 illustration)
and two other binding designs for The Folio Society: The Ottoman Empire, 2003,
and
'At the Back of The North Wind' by George McDonald.

Radio Times -
I have illustrated regularly for the Radio Times magazine since 2002, mostly Radio Choice illustrations. I painted the cover for the Easter Radio Times issue in April 2015.